The youngest of our Reluctant crew is a true country boy. Even though we live in the sterilized suburbs, he manages to find the mud, bugs, puddles and, did I mention lizards, in every corner of our little world. No refuge is safe, no drainpipe remains un-searched when the boy is on a lizard hunt.

This morning was no exception. After depositing the oldest at school, riding bikes home with a reclaimed tomato cage on the handlebars (another story for another time!), we recommenced the morning routine which usually consists of him begging me to build legos while I am trying to pretend that I like eating egg whites and turkey bacon for breakfast every day!!

Today, however, he caught the scent of a lizard hunt and would not be denied until he had found the home of said lizard. This captivation and focus is rare in a five year old, and so we encourage it, often to the dismay of my more cerebral seven year old. 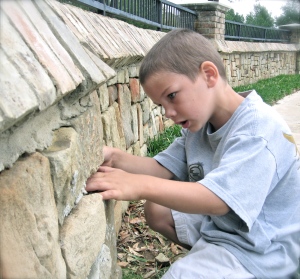 Now, this may seem strange, but we have named the lizards around the house, and the chap in question is probably Wesley (named after John Wesley), and is a Texas Spiny Lizard. Of course, there are myriad Anoles all over the place, brightening up the dreary brick with their chartreuse coloring and bright coral dewlaps, but Wesley is different. Wesley is large, browny grey and has spikes – much more interesting to a little boy to whom danger is part of the appeal! Wesley is also a master of disguise and apparently quite the traveller. You see, the boy spent much of last year head first in the bushes in front of my office chasing Wesley and, inevitably, Wesley ended up under the screen in my office window taking refuge from clumsy fingers!

This year, however, he appears to be trying a different tactic, that age-old defensive strategy of “find-a-cave-and-hide-in-it” (and since Wesley is a lizard and not a Saudi terrorist, we can be pretty sure he isn’t hiding in a house in Abbotabad watching himself on TV!). As far as the boy is concerned this should be game-over, but as the title of this post suggests, he was not to be denied!

After observing a certain amount of stabbing-at-the-wall-with-a-stick, I wandered (nonchalantly to avoid detection and hopefully to win the prize of a photo of the otherwise absorbed boy) to the end of the garden to see how the hunt progressed. To my dismay, I found a huge hole where the, admittedly shoddy, construction of the wall had given way to the persistent boy and his hunt for Wesley. After a brief, and totally over his head, lecture on vandalism, I attempted a little dry-stone-walling and assured the boy that Wesley was totally able to get in and out without breaking the wall apart again. Not that the same can be said for the boy!

Luckily, for me and the wall, at this point the boy’s ever-present appetite barged its way to the front of the queue for attention. After cheerios and milk he demanded we check on the super-furry saltmarsh caterpillar that he found defoliating my vegetable garden yesterday. Like I said, a true country boy!

People who Inspire Me

connecting through the power of story

Church of the Resurrection